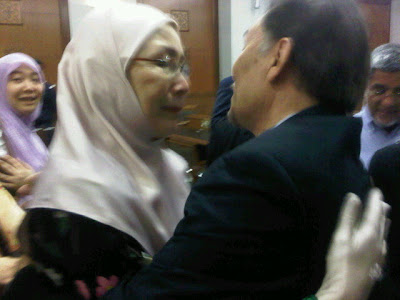 
These are the live updates from the The Star team at the scene at the KL Court Complex at Jalan Duta and the trial:

9.40am: PKR Youth wing members and other supporters waiting for Anwar to emerge from the court house, and are most likely going to escort him to Masjid Wilayah.

Other supporters assemble and sit in front of the complex main gate to cheer and celebrate Anwar's acquittal.

The scene at the main gate

9.30am: Judge Mohamad Zabidin Mohd Diah - "After going through the evidence, the court could not be 100% certain that integrity of DNA samples was not compromised, and finds that it is not safe to rely on DNA evidence.

Anwar says he is surprised and vindicated: "We have an agenda. Will focus on elections."

Supporters in court clap for him.

Crowd outside begins heading towards Masjid Wilayah, where Anwar will meet them.

9.25am: High Court acquits and discharges Anwar of sodomy charge. He hugs his family, Wan Azizah is in tears. Lawyers shake hands. Crowd outside breaks into cheers and chants as the court decision is known.

9.20am: Court proceedings are starting. Anwar now puts on a coat.

9.10am: Crowd situation outside court complex under control, situation is calm. People settle down as a few lower-rung Pakatan leaders start giving ceramahs in support of Anwar.

8.55am: PAS president Datuk Seri Hadi Awang has just entered the court grounds, sparking another media melee outside. The situation however is under control as members of the party's Unit Amal had paved the way earlier.

8.50am: Anwar, dressed in a blue long-sleeved shirt and black slacks, is in the courtroom. His wife Wan Azizah is dressed in a floral baju kurung. Anwar goes around shaking hands with lawyers.

8.45am: The prosecution team has entered the court.

Anwar, swarmed by the press, is smiling and appears to be in a good mood. He's inside the court complex now going up the lobby.

8.30am: Anwar has arrived at the court complex. The crowd breaks out into frenzied cheering and chants of "Reformasi".

Anwar's bodyguards in a slight scuffle with media as they try to wedge their way past cameramen and photographers scrambling to get shots of Anwar.

Commotion at the main gate as people get worked up. Police have closed the gate and opened a small door on the gate to let Anwar through.

Reporters allowed into courtroom, which is packed.

According to a police source, the crowd has swelled to about 10,000. About 100 policemen deployed at the gate.

Court staff, lawyers and clients told to use back entrance to get into court.

Anwar left his residence at 8am with his family, including wife and daughters, in a convoy of eight cars. When met at his residence, Anwar looked calm and cheerful. "I'm praying for the best. My predictions on the outcome is based on the law and facts. I've been informed that there is a large crowd all ready, but peaceful. I don't believe they should be provoked. All the best," he said.

Earlier, a little girl was seen walking into the crowd wearing a head band with the words "Hidup Anwar" and wearing a mask. Student activist Adam Adli also seen in the crowd.

8am: A team of medics from the Health Ministry seen on fifth floor of the building, with a wheelchair.

An unidentified man is leading the crowd in reciting a doa and ending with takbir.

Earlier, a rally participant dressed as Justice Bao joined the fray, as sporadic chanting broke out all over the rally grounds. The crowd has swelled.

7.50am: Police are thoroughly checking the bags of those coming into the court complex. They are also being very polite.

Tian Chua tells the crowd that Anwar is expected to arrive at 8.30am. "We will wait here until verdict is delivered," he says.

A rally participant at the jalan Duta Court Complex.

7:45am PKR VP Tian Chua is addressing the crowd at the car park using a hailer.

7.30am: Traffic along Jalan Khidmat Usaha (main road to Court Complex at a crawl as motorist start going to work.

There are a few thousand people outside the court house. Court proceedings expected to start at 9.30am.

Although police have disallowed placards with the words "Bebaskan Anwar" (Free Anwar), some of them were still seen carrying them at the car park.

7.25am: The crowd has grown to a few thousand. Rally participants have started chanting "Reformasi!" and other pro-Pakatan Rakyat slogans while holding up placards and wearing masks bearing Anwar's visage.

7.15am: Traffic flow is smooth near the Jalan Duta court complex. No road bloacks. Police managing flow of traffic and people at intersection turning into the court complex.

6.45am: There was no roadblocks on the any of the roads to the High Court complex here early Monday morning.

Police blocked the road turning into the High Court but never restricted anyone from gathering outside along the road side and curb.

There was barely any police presence except a few personnel manning the blockade. Crowds began trickling to the complex area at 12.20am after attending the previous night's 901 Anwar speeches in Kg Baru and Kg Pandan.

Throughout the night, every hour or so, police helicopters were seen patrolling the night skies above the city.

At 4.30am members of various media began arriving. Heavy drizzle began and those already present sought shelter at the food court nearby.

At 5am the rain became heavier. At 5.15am several buses and dozens of vans ferrying policemen were seen entering the court complex.

Until about 6am, the gates to Martrade where many expected to park their vehicles remained closed. Instead, cars were parked on both sides of the road despite police cones placed along the whole stretch.

At 6.05am, the crowd was finally allowed to enter the car park area outside the court complex. 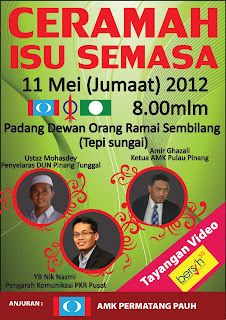 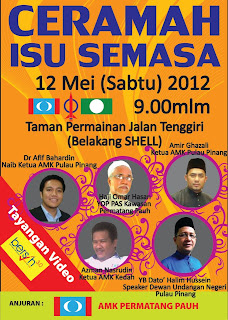 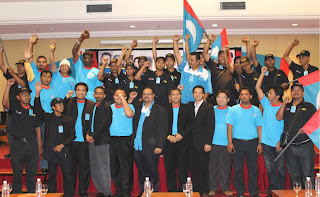